SOME GAMES ARE JUST
​BIGGER THAN OTHERS​

From time to time, the battles on Pyrriah grow too big for a single gaming session, a single table, or a single opponent. Here is a recount of those battles. 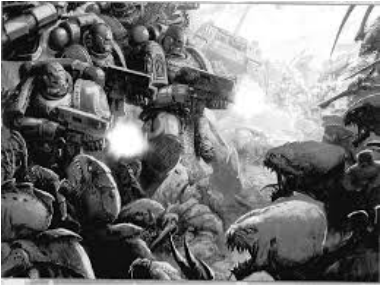 ​Eldar Expeditionary Force
View and Download the Primer for this Epic Battle Below!

The initial Tyranid assault fell swift and brutal on the inhabitants of Pyrriah. The cities of the planet were completely overrun by the forces of the Hive Mind, leaving the populace of the major urban centers helpless before the marauding bands of the devourer. Caught off guard by the sheer brutality unfolding around them, the planetary defense forces of Pyrriah at first were unable to muster a response, but soon ranks of guardsmen and armour deployed from the military bases to meet the enemy and launch a counter attack. Lasrifles and tanks rained fire into the scuttling masses of the Tyranid invaders, as Vendettas and Valkyries soared overhead delivering missiles and infantry into the fray. The skies and ground thundered with fire and the roar of war, and rows upon rows of the aliens fell to the wrath of Pyrriah's defenders. But the defenders were too few, and the enemy too numerous.

Soon the defenders of Pyrriah were reduced to ragtag bands of shocked survivors retreating back to their bases, beaten and demoralised by the brutality of the foe that they had met for the first time. In the course of a single day, the planetary defense forces ceased to exist as a unified fighting force. In bunkers and hideaways, the surviving leadership struggled to improvise a new strategy.

The decision was made to abandon the bases closest to the Tyranid forces and to evacuate whatever guard forces that could be salvaged in order to consolidate planetary defense forces in more defensible locations. To this end, remaining Valkyrie troop ships were diverted to the forward bases to pick up survivors and transport them to rally points set up elsewhere on Pyrriah. The mission was hazardous, as the Tyranid swarm pursued its prey right into the bases, seeking to exterminate the last of the resistance and consume all biomass in its path. The scene that greeted the Valkyrie pilots was grim: guard forces carrying their wounded comrades to the evacuation points, pockets of armor and infantry trying to hold off the enemy as long as life and ammunition lasted, and panicked hordes of civilian survivors desperately seeking whatever promise of refuge still existed on the hell of Pyrriah. Many pilots never returned, their ships destroyed on the landing pads or in mid-flight by the onrushing horde of Tyranids.

To stem the tide, the warriors of the Adepta Astartes deploy to Guard Base Alpha, to hold the line while the guard forces evacuated and to make the enemy pay dearly for every meter of ground it gained.  The Ultramarines are the first to arrive, including veterans of Tyrannic wars that had pursued the Hive Fleet to Pyrriah. Black Templars, who had long a presence on Pyrriah, shore up the defenses and to buy time for the evacuation. Finally, and unexpectedly, the forces of the Dark Angels join the fray, to slay the foe of the Emperor, and to ensure the purity of the survivors. Joining the fray are the Space Wolves, who appear unexpectedly and seemingly out of nowhere to add aid to the defense of Pyrriah.

But the Tyranids are not the only foe of the Empire that must be countered.  The Forces of Chaos, led by the bloody Khorne daemonkin war band known as The Wrath, also march upon Guard Base Alpha, joined by a great horde of their greenskin allies and Renegade guard forces turned to the service of Chaos. The Astartes must not only buy time for the evacuation from the Tyranids, but also hold off the ranks of daemons, orks, and heretic armor that march upon them. Consolation may only be found in that the Forces of Chaos and the Hive Mind despise each other as much as their human prey, and both seek to turn the base into a twisted reflection of their domain.

And in the middle, the enigmatic Eldar enter the fray; their purpose to ensure that neither man nor alien nor daemon nor ork wins the day outright. Their allegiance is only to themselves. They may aid the Empire in its most desperate time, but may also turn upon it if it proves too strong. The Eldar's desire is a battlefield littered equally with the corpses of man, Tyranid, ork, and daemon.
Powered by